The Huffington Post- Hive Art Gallery: Still Thriving after All These Years! 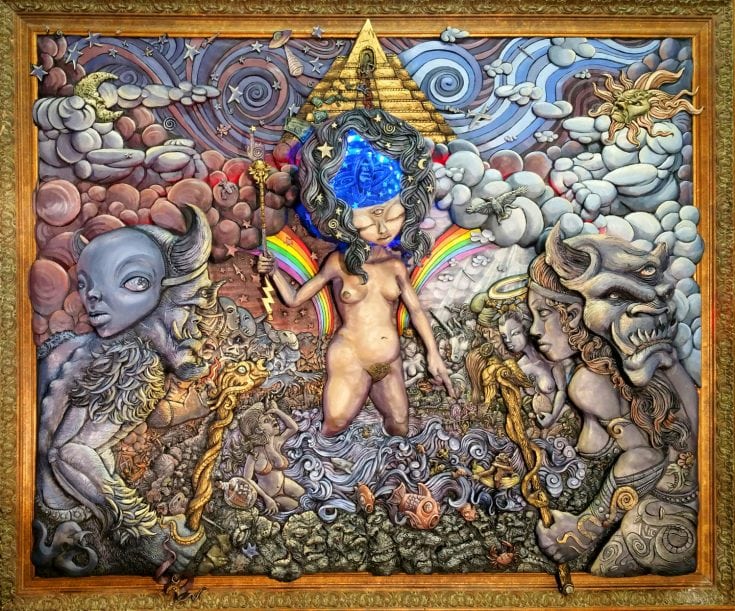 As an art writer, I have seen galleries come and go, so it’s nice to see a gallery thrive. In April of 2017, the HIVE Art Gallery & Studios will celebrate its twelfth anniversary. Owner and fellow artist Nathan Cartwright is the captain of the ship…making sure that it’s smooth sailing ahead for all its artists. “The gallery has evolved…in the first few years we were primarily a gallery with many working artist studios. Now we are a gallery, with many exhibition studios (artists run their own art business out of the space) plus working studios on the second floor.” HIVE hosts over forty resident artists while presenting a new exhibition and reception each month. It’s also the oldest gallery housed in one location in the downtown area and has been dubbed best gallery by both the LA Weekly and the Downtown News.

Cartwright will be showing one of his new works titled Gaia and the Birth of a New King as part of the December event. The mixed media relief sculpture was created with super sculpey and magic sculpt, with led lights and an infinity mirror.

“This piece is a personal mythology and metaphor for the self-angels and demons huddled around a body of water. An angel on the right wears a demon mask, while a demon on the right wears an angel mask. From the body of water emerges a female figure (Gaia), and in her head is a baby king. The king is symbolic of a new, better world filled with opportunity. In the skies, the moon and sun look over…the conflict of the crashing waves and drama of the earth is nothing new to them.” http://www.artwrightstudio.com/

Ty Cummings is one of the featured artists who will be celebrated at Hive’s opening reception (December 3). I’ve had the chance to watch Cummings grow as an artist. His new works offer alternative dimensions exposing more depth and vulnerability. His mixed media work, Whereabouts is one of my favorites and will be a part of his exhibition on view this Saturday. “Whereabouts is a location that exists in your mind at mysterious times of day,” said the artist. “It’s vandalized. It ranges from raw to real, so it has a tension between realities.” I asked Cummings if he approaches each work in a similar way. He explained, “I paint in different ways, sometimes exploring and layering mediums and letting the unconscious flow, and sometimes it’s more planned out. My philosophy is to stay busy and also let things come freely.” He also went on to say that he finds inspiration all around him…”I have worked with some amazing artists.”

This will be the second time Cummings will be exhibiting at Hive Gallery. His work has been featured at bG Gallery at Bergamot Station, the Santa Monica Art Studios, Downtown Playground, LACDA, the Venice Art Crawl, and the Brewery Art Walk. http://www.tycummings.com/

Another artist, Xianpitt, who rents a studio space at the gallery said, “I have been with the HIVE for about a year. I am a huge fan of the Hive and especially Nathan. The space is so alive with so many dynamic moving parts, and Nathan’s willingness and his exploratory nature, I think, makes the explosive powder necessary to sparkle like the Hive does! He is the bees knees! and backbone! and the king bee!” https://xianpitt.wordpress.com/

Also on view will be the “White Tiger Project” which has enticed artists to re-create their own version of a custom painted/sculpted white tiger plush doll designed by Ivonne Escoto, a freelance special effects artist from Los Angeles.

Escoto has been making a name for herself in the film business. Working on projects such as Spider-man 2, Alien vs Predator, Tron Legacy, Grimm, Sleepy Hollow, etc., she comes to the art world via a different route than most. Escoto’s life changed dramatically when she participated in Jim Henson’s Creature Shop Challenge show. The artist started exhibiting her work at Hive Gallery a year ago. “The ‘White Tiger Project’ is a collaboration of more than twenty amazing artists painting a white creature created by yours truly. The creature is a white canvas of resin and fur and that’s their challenge!”

Escoto added that the Hive has become the home of the White Projects. “Nathan has inspired me to keep going because he is always so welcoming of ideas and trying new things…he has become one of my dearest friends and I love that he doesn’t give me boundaries.” http://bluangel13.wixsite.com/bluangel13

“The Dark Art of Ryan Patterson,” a featured show by Ryan Patterson will also be celebrated as well as a group show titled “ARTRATES JAPAN.” Over thirty artists exhibiting from Japan will be featured throughout the month.

Be sure to stop into HIVE Gallery and support local artists. Check out the youtube channel which features an animation/art news show called the Hive O’clock News at www.youtube.com/thehivegallery

You can also find an android app (under Hive Tarot) showcasing HIVE artists and its ongoing/yearly tarot show that happens every January.