LA TIMES: For the women of the rogue taxidermy movement, there’s a curious allure to the taboo art 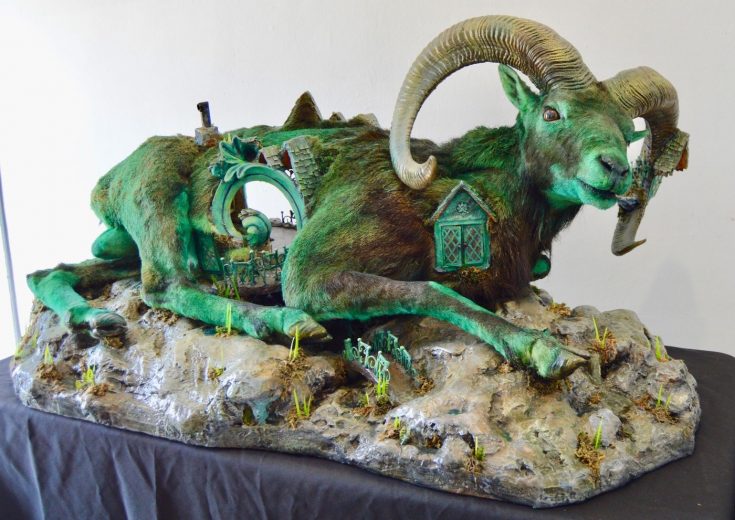 Peaked roofs pop out of torsos. Staircases spiral up antlers like vines. The effect is both charming and a little creepy — macabre and magical.

Imagine “if Disneyland and a natural history museum got together,” Weston said with a laugh. “That’s my thing.”

The Los Angeles artist belongs to the rogue taxidermy movement, an art scene that’s been gaining ground in Southern California for about a decade. Practitioners range from L.A.-based Catherine Coan, whose theatrical tableaux offer an archly humorous take on the clash between humans and the natural world, to Ave Rose, whose bejeweled automata and stunning still sculptures recall Victorian curio cases.

According to Rose, artists are drawn to the tangible nature of taxidermy — a quality sometimes missing in modern life. “Everything’s digital now. Everything is kind of fleeting,” said Rose, who was also a contestant on Game Show Network’s “Steampunk’d” show. “People are looking for a tactile experience they can hold on to.”

“We want to work with our hands again. We want something that someone touched,” added Allis Markham, who creates meticulously realistic mounts for museums and nature centers, as well as A&E’s “Bates Motel” and Gucci’s “Guilty” ad campaign, as the owner of Prey Taxidermy in Los Angeles. “This art has that connection to the natural world.”

Coan, whose father is a hunter and fly fisherman, grew up in Montana in a house filled with taxidermy. She began incorporating taxidermied animals in her art in her series “Canary Suicides,” featuring whimsical tableaux of dead birds in captivity that serve as “little narratives, almost poems, about death and delight,” she wrote in an email. “I think the renewed interest in taxidermy today has to do with our understanding of and impact on the natural world,” wrote Coan, who calls her work “hybrid taxidermy.”

Taxidermy has been part of modern art’s vocabulary for decades. In the 1950s, Robert Rauschenberg incorporated both a stuffed bald eagle and a mounted angora goat in his mixed-media Combines and Edward Kienholz began adding animals – living and dead – to his large-scale found-object tableaux.

But today’s rogue taxidermists have more in common with Walter Potter, the 19th-century taxidermist whose anthropomorphic dioramas feature guinea pigs playing cricket and kittens having tea, than contemporary artist Damien Hirst and his sharks floating in formaldehyde.

The founders of the rogue taxidermy movement – Sarina Brewer, Scott Bibus and Robert Marbury – define the genre as “pop-surrealist art characterized by mixed media sculptures containing conventional taxidermy-related materials that are used in an unconventional manner.”

There’s a lot of wiggle room within that definition, as Weston can attest.

“It’s really interesting how many doors have opened up to me being part of that world,” said Weston, whose work will be on display at Hive Gallery & Studios in Los Angeles until Sunday as part of the “Master Blasters of Sculpture 10” exhibition. She’s participated in the recent DesignerCon at the Anaheim Convention Center and is headed to Miami Art Basel in early December.

I was an outcast growing up … and it’s incredibly cool to be with all of these people who are passionate about taxidermy and what a beautiful art it is.

“It’s so cool because it’s like this girls club where we can go and gossip and talk about ‘RuPaul’s Drag Race,’ and then an hour later we’re all knee-deep in bones and guts and stuff,” she said with a laugh.

Acknowledging that the fields of sport and preservation taxidermy have traditionally been dominated by men, Coan said taxidermy is “a medium particularly open to ‘feminization’ — altering, decorating, reimagining an animal rather than presenting it as a trophy from or a ‘true’ representation of nature.”

“An artist working in taxidermy changes and contextualizes an animal in order to consider or comment on our relationship with nature,” she explained. “This is why most of my tableaux take place indoors, in quaint household situations … Juxtaposing the free and the domestic for me brings up questions about our definitions of ‘wild’ and ‘tame.’”

She continues: “Women tend to understand wild, tame and the gray area between in ways that men do not. Just look at the Victorian obsession with the corset: You don’t cage something that doesn’t want to get away from you.”

The great-granddaughter of photographer Edward Weston, Brooke Weston grew up in Carmel Valley, a rural community in the heart of Monterey County wine country.

“I’ve always had this idea of looking at objects and thinking how design, art and fantasy can make really mundane things really spectacular, with miniature worlds within worlds everywhere,” said Weston, who remembers venturing into the woods as a child and constructing little landscapes. She’s also a longtime collector of what she calls “oddities” – bones, skulls and the like – a habit she may have picked up from her hunter father.

Weston was living in Oregon about a decade ago when she struck upon the idea that would shape her artistic career.

“I think it just came on me: ‘I should cut open these taxidermy mounts and see how I can make them into sculptural diorama,’” recalled Weston, who was 26 at the time.

“I became pretty myopically obsessed with the idea,” she added with a laugh.

While some rogue taxidermists work with animal carcasses they’ve painstakingly preserved themselves, Weston scours Craigslist, eBay and estate sales for unwanted taxidermy. “Almost every (mount) I get, the story behind it is that someone’s wife didn’t like it in their living room … and it’s in their garage,” she said with a chuckle. “They just want to get rid of it to a certain degree.”

Using power tools, Weston cuts the taxidermied animal open and hollows it out. Then she uses plaster and other building materials to create a miniature world inside the creature, shaping tiny alpine cottages, ships’ cabins and fanciful castles by hand.

Next come furnishings such as chairs, sofas, record players and paintings, which Weston often makes herself. (Her studio partner, Marxidermy, supplies furry mouse rugs, as well as “sweet, little sleeping mice babies” for Weston’s darling dioramas.) The final step often involves dyeing the animal – a mossy green in the case of “Rams Rest,” a brilliant pink for “Phantom Rose.”

According to Weston, her artistic vision is often guided by the animals themselves.

Take “Violet Knight,” which began its second life as an elegant male fallow deer preserved in mid-prance. “He had this stance of power, this ‘king of the forest’ look to him along with this kind of whimsical (expression),” Weston said, so she built a dainty purple castle and dyed the deer lavender. “He’s still really masculine. He definitely carries it, this crumbling castle dollhouse I built on him.”

We want to work with our hands again. We want something that someone touched.

Weston acknowledges that her work shares a certain kinship with her famous ancestor.

“Edward’s work is definitely seeing pieces of nature and objects and capturing their shape and form in a way that transforms the subject, giving the viewer a whole new reality to it,” Brooke Weston wrote in an email. “From a very young age I was fascinated and enchanted with his perception. His photography has instilled in me to view objects seeing a hidden beauty and form.”

But while Edward Weston’s photos showcase the secret, seductive beauty of nature – spiraling shells, undulating sand dunes, the sensuous folds of a cabbage leaf – his great-granddaughter’s work playfully subverts it. His images are black and white. Her sculptures explode with color.

Brooke Weston’s work has earned her a loyal following – as well as criticism of the kind often encountered by artists who work with dead animals. (One woman compared Weston to Hitler, drawing parallels between her taxidermy-driven art and the Nazis’ rumored practice of turning human skin into lampshades.)

“Women somehow, about 10 years ago, went, ‘This is something we want to do en masse,’ ” said Markham, noting that female students — among them graphic designers, computer programmers and administrators — fill up workshops offered by Prey Taxidermy.

“(About) 20,000 years ago, women were doing the cooking and the slaughtering and the storing. … We’re very comfortable with what people would consider gross jobs,” she said, so modern female taxidermists are “both bucking tradition and embracing it at the same time.”

Weston said she’s found a community in rogue taxidermy she never could have anticipated.

“I was an outcast growing up … and it’s incredibly cool to be with all of these people who are passionate about taxidermy and what a beautiful art it is,” she said. “It’s been pretty life-changing.”